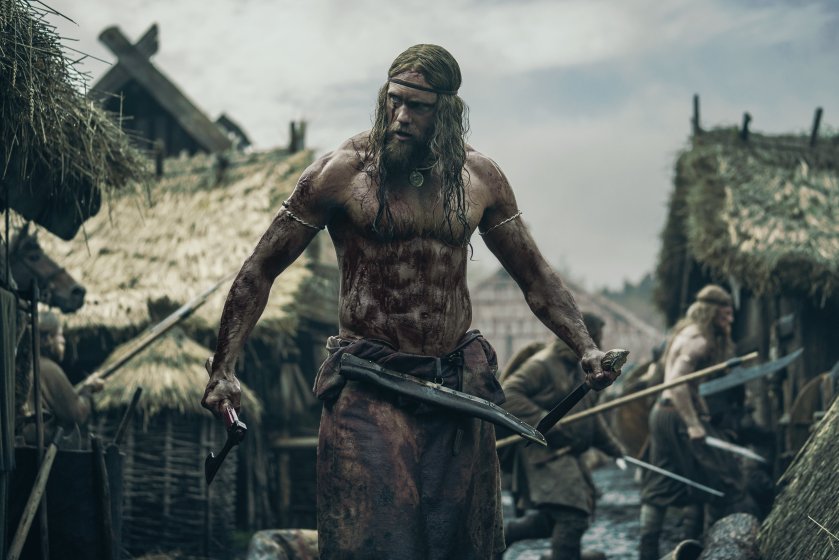 Synopsis: A Viking Prince swears brutal revenge after witnessing his father’s death at the hands of his traitorous uncle…

Review: Over the last few years, there have been several up-and-coming directors who have made a significant impact with their careers, establishing their reputations as sought after talent, with every film they make becoming event-worthy. One such director would be Robert Eggers. His first two films, The Witch and The Lighthouse, with a combined budget of $15million, became indie darlings that were both released to critical acclaim. With that success to his name, it has given Eggers the platform to go all out, backed by a studio’s considerably larger budget (between $70 and 90 million), and make his biggest and most visually striking film to date.

Prince Amleth is a happy young Viking boy living with his father King Aurvandill (Ethan Hawke) and his mother, Queen Gudrún (Nicole Kidman). Aurvandill is aware that the time will come for Amleth to one day assume the responsibilities of King in his stead. However, before Aurvandill can properly prepare him for his role as King, Auravandill is betrayed and murdered by his brother Fjölnir (Claes Bang). Faced with the prospect of certain death at his uncle’s hands, Amleth is forced to flee but vows brutal revenge against his Uncle for his crimes. Several decades later, the now-adult Amleth (Skarsgård) has transformed into a fierce and brutal Viking warrior. Having lost sight of his original mission for vengeance, a chance meeting with a seeress (a brilliant cameo by Icelandic singer Björk), reminds him of the promise he made to himself all those years ago.

Based on the legend of Amleth, which served as the inspiration for the character of Hamlet in the famous play by Shakespeare, Eggers and the Icelandic poet and novelist Sjón, have crafted a screenplay that is so steeped in the richness of Norse mythology, that there probably could be a whole short film devoted to the extensive research that undoubtedly went into the making of the film. While it is first and foremost a tale of one man’s mission for revenge, Eggers takes a lot of time in the first act to establish the culture and the mythology that was central to the civilisation at the time, while simultaneously incorporating the visually striking aesthetics he’s renowned for.  By taking his time to explore the complexities of Norse mythology, Eggers is able to immerse his audiences with scenes of wild rituals, songs and spells and sacrifices. While it is true that at its heart, the plot is very much one man’s quest for bloody revenge against the man who committed a terrible atrocity against him many years ago. However, that does the plot a disservice, as there’s so much more meat on the bones to this story.

Such a physical and brutal film requires a committed leading performance, and in Alexander Skarsgård’s leading turn as Amleth, you have that and then some. His physical transformation for this role is extremely impressive, practically at times having transformed himself into a terrifying feral creature that’s more animal than man. He’s an absolute behemoth of a warrior that you would categorically not want to find yourself in battle with. While his physical prowess cannot be denied, there’s unfortunately not a lot of room for character development, beyond his desire for revenge. The character of Fjölnir could have been a very cliched villain who commits an act of betrayal against his family out of jealousy towards his brother. But as a terrifying and ruthless antagonist, Claes Bang imbues him with nuances and motivations that flesh him out.

Re-teaming with Eggers, after The Witch, Anya Taylor-Joy’s Olga is perhaps the character who is given the most development as the sorceress Olga. A witch who’s resourceful and with a cunning intellect, she works closely with Amleth to help him achieve his goal. A further reunion comes in the form of Willem Dafoe, who is clearly having a riot in his small but significant role of Helmir the Fool. Given she’s reduced to a cameo appearance in the first two acts, you’d have been forgiven for forgetting Kidman was even in the film at all. However, this all dramatically changes as she really stamps her authority onto the scene during the climactic third act.

As this is a tale about vengeance, some violence was inevitable, but this time around, Eggers holds nothing back. The violence is uncompromisingly brutal that will test even the strongest of stomachs. The thrum of the booming drums that make up a considerable chunk of the score is the perfect complement to the sweeping visual majesty of the rip-roaring spectacle. Even with one or two pacing issues in and around the middle, it’s not enough to drag down the sheer epicness of what Eggers brings to this tale. Into the halls of Valhalla, we go!

Bloody, ferocious and wildly entertaining, with an exceptional cast and an extraordinarily committed leading performance from Skarsgård, an ascension into the halls of the greatest revenge films of all time awaits.