Synopsis: When a police offer finds a small, speedy blue hedgehog, he must do all he can to prevent him from falling into the hands of the nefarious Dr Robotnik..

Review: For anyone who grew up in the 90s, the video gaming industry was, by and large, dominated by two very prominent characters, that of an Italian plumber with a red hat, and a super-fast blue hedgehog. While the former has been brought to the big screen once before, albeit not very successfully, the latter’s journey to the big screen has at last arrived, and while it has been far from the speedy one he would have liked, it’s one that has defied the odds and delivered the goods.

When Sonic is forced to flee his home world, using the power of his magical rings, he arrives on Earth. Initially, his existence is completely unknown to everyone for a significant period of time. Though, when Sonic accidentally reveals his presence to local police officer Tom Wachowski (Marsden), the pair strike up a friendship. This puts Tom on a collision course with the Government, as they recruit the dastardly Dr Robotnik (Carrey), to pursue and capture Sonic for experimentation, which forces the two of them to flee for their lives.

It’s no secret that when the first trailer for the film came out and the design of this iconic character was unveiled, it was to put it mildly, not well received at all. Fans gawped in horror at the design of Sonic. Hence, the film’s release was delayed so the design of Sonic could be re-jigged. A decision that paid dividends, as the revamped design of the titular character feels much more authentic, and less like some ungodly abomination that would have given viewers endless nightmares. Voiced and motion captured by Ben Schwartz, this redesign has the personality and the traits that make him feel like a version of the character that has been drawn from the games.

It wouldn’t be a Sonic film without his classic nemesis, and Jim Carrey gives everything he has into the role of Dr. Robotnik. This works a treat as he’s clearly having a tonne of fun playing such an eccentric antagonist, especially one that that enjoys twirling his moustache in the most hilarious cartoonishly evil manner. Carrey goes all in with his performance and it ensures that every moment he’s on screen is delightfully entertaining, and he’s easily the best aspect of the human cast. Aside from Carrey, Marsden is solid as the cop who must do all he can to prevent Sonic from falling into Robotnik’s hands. While the accompanying story of two unlikely individuals forming a friendship is nothing new, it serves the story of this little Blue ball of energy and how he strives to find his place on our world, very effectively.

While the action scenes are nothing particularly ground-breaking, seeing Sonic whizz across the globe duelling with Robotnik, with the iconic sound of Sonic’s rings as the perfect nostalgia boost for good measure, is undeniably entertaining. Though, there is one scene that, while you can understand why they would use a scene like it, feels like it’s a bit too similar to the iconic Quicksilver scene from Days of Future Past. Films based off video game franchises have often struggled to deliver the goods, and while it took time, eventually this adaptation has delivered a film worthy of bearing the name of one of the most beloved characters in video game history.

The story is cliched, but with a thankfully re-designed titular character and a pitch perfect villain, the film collects all the rings to deliver a worthwhile adaptation of a much beloved video game franchise.

Synopsis: Following a split from The Joker, Harley Quinn is determined to start fresh and get back on her feet. However, she soon realises that a number of people in Gotham want her dead…

Review: 2016, a year that promised so much for the DC Extended Universe. Two massive flagship blockbusters in the shape of Batman V Superman, and Suicide Squad were lined up. These were the two films that were supposed to kick-start their cinematic universe to the next level. Unfortunately, that hype soon turned to disappointment as neither lived up to those lofty expectations. Yet through that disappointment,  Margot Robbie’s performance bringing the much loved Harley Quinn to life proved to be one of the few rays of light. Subsequently along with a certain Amazonian warrior, a platform for the DCEU to build on going forward.

Following a brief recap of the events of Suicide Squad, Harley Quinn’s relationship with The Joker is over, something she announces in quite the dramatic fashion. Seeking to put this behind her and move on, it dawns on her that being with The Joker offered her protection from some of Gotham’s underworld. With that gone, a lot of these people are now baying for her blood, and they sense an opportunity to exact revenge on Harley for past grievances. Soon enough, Harley comes to the attention of crime boss Roman Sionis (Ewan McGregor) who’s seeking possession of a rare artefact that would enable him to take control of Gotham’s Underworld, putting him on a collision course with Harley and an array of other badass ladies. 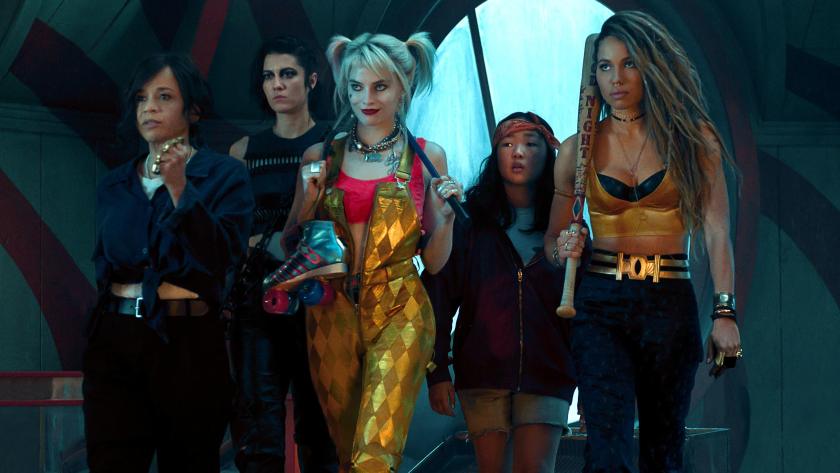 Margot Robbie continues to prove that she was perfectly cast to bring the one of the most beloved comic book characters to life. She might (read probably) be a complete psychopath, but Robbie imbues Harley such charisma that it’s impossible not to get on her side. Gone are her Suicide Squad associates and in their place we are introduced to an exciting crop of badass heroines. We have Black Canary (Smollett-Bell), Cassandra Cain (Basco), Huntress (Winstead) and Renee Montaya (Perez). Though they all get a moment to shine, the most compelling character of the new crop is Huntress, an archer who is on a deeply personal mission of revenge, and who could definitely use her bow to kill you one hand tied behind her back.

For her first foray into the realm of super-hero film-making, Cathy Yan brings a vibrant, colourful energy to the action scenes, which never fail to be consistently entertaining. However, with the exception of one enthralling showdown in the second act, there’s a majority of these don’t take place until the film arrives at its concluding act, and all the pieces have fallen into place. Consequently, while they are consistently entertaining, there’s a distinct dearth of punch-the-air-in-delight moments, to really get the adrenaline pumping. With female empowerment beating at at the heart of the film, screenwriter Christina Hodson certainly captures that strong camaraderie and teamwork between the titular Birds of Prey. In spite of this being their first time on screen together, there’s a real feeling of sisterhood between the women, and it helps each of their performances shine.

Ewan McGregor as Roman Sionis was certainly a strong piece of casting and while he’s clearly having fun with playing a villain, he frustratingly doesn’t get enough material to sink his teeth into. While he’s certainly far from the least interesting to villain to have emerged from the DC Cinematic Universe, there’s just not enough material for him to create a lasting impression, which is a shame when you think of the calibre of dastardly villains that DC have in their repertoire, feels like a missed opportunity. Birds of Prey may not have been the home run DC wanted it to be, but with Harley and her baseball bat in hand, it’s certainly a solid swing in the right direction.

There’s vibrancy and entertainment to be found, but even with another pitch-perfect performance from Robbie, the screenplay frustratingly gives the titular team little time to shine.