Synopsis: An account of the events leading up to the nuclear disaster at the Chernobyl Nuclear Power Plant, and the subsequent fallout of one of the deadliest man made disasters in history…

Review: As human beings, our lives can so often be irreversibly impacted by natural disasters. Though we are powerless to prevent them from happening, preparations can be made to mitigate the damage and devastation that they leave in their wake. It’s a stark contrast to the numerous man-made disasters that we have seen throughout history, that have also had similarly deadly consequences. However, when you look at how the events transpired, it’s hard to overlook the fact that someone was responsible for allowing these atrocities to happen, and how they could have very easily been prevented. One such disaster, arguably the worst man-made disaster in history, is that of the Chernobyl Nuclear power plant explosion. A tragedy of incomprehensible fallout, captured with horrifying realism in this tense and devastating HBO miniseries.

Over the course of five nerve-shredding episodes, showrunner/writer Craig Mazin and director Johan Renck, explore the disaster and its horrific aftermath. Firstly, recounting the the night of the deadly disaster, and the catalogue of errors that led to the fatal explosion. Following on from that, looking at the attempts by the Soviet government to contain the fallout from the disaster. You watch with disbelief as they seek to prevent the already horrific situation from spiralling into something much worse, at times with shocking degrees of negligence and recklessness. Before ultimately, trying to establish how such a nuclear catastrophe on this scale could have ever happened in the first place. At numerous points throughout the series, this feels more like a documentary. This is largely down to the expert production design, which recreates the power plant, and the surrounding neighbourhoods, which feel remarkably authentic. 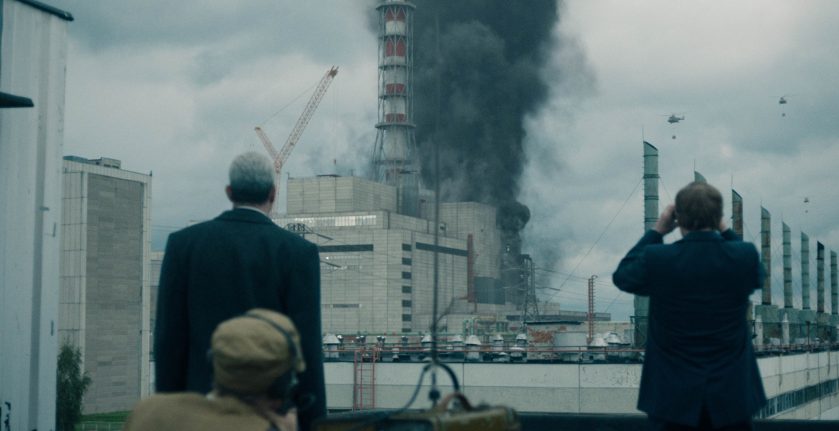 Irrespective of whether you’re coming to the series as someone who knows everything about the disaster, or if you know the barest minimum, Mazin’s scripts expertly combine informative scientific facts, with intense and devastating drama. With each episode, it’s made painstakingly clear to us all as to the full extent of the horrific nightmare that was unfolding, and enabling the audience to process just how an event like this could have ever happened. With the exception of a few artistic liberties, Mazin’s scripts faithfully recreate how events unfolded, and the excellent writing is brilliantly combined with Johan Renck’s masterful direction. Each episode expertly blends genres such as the intense drama, and the traumatic horror of those who were the first to be affected by the radiation, to those were recruited for some extremely perilous missions. Furthermore, the crackling sound of a dosimeter going haywire is a sound so unnerving, it may well invade your nightmares.

With brilliant writing, combined with expert direction, and along with Hildur Guðnadóttir’s haunting score, every member of this cast deliver sublime performances. However, the three who shine the brightest are the three characters whose arcs are the pillars of this miniseries, the biggest of those belongs to Jared Harris who is exceptional as Valery Legasov. Drafted in by the Soviet government to lead the efforts to mitigate the effects of the tragedy, he’s not afraid to speak up and the people in charge just sweep everything under the rug. By his side, Stellan Skarsgard is equally tremendous as Boris Scherbina, a Minister whose relationship with Legasov is initially frosty to say the least. However as the two men work closely together, to combat the scale of the disaster they’re dealing with, it strengthens their relationship immeasurably. Last and certainly by no means last is Emily Watson’s stirring work as Ulana Khomyuk. A composite character serving as the embodiment of the countless number of scientists who worked to uncover the full truth behind this unimaginable tragedy.

The show serves as a tribute to all those brave souls who risked their lives to prevent the catastrophe from turning into something that could have been even more cataclysmic than it already was. However, the central theme that beats at the heart of this miniseries is the extremely damaging effect that lies can have when a country is in the grip of a catastrophic event like the Chernobyl disaster. In the wake of a deadly catastrophe that has wreaked unimaginable havoc, electing to cover things up with lies and misinformation may seem like a good idea at the time. However, as was the case of Chernobyl, these lies and misinformation came at a substantial cost, which is still being felt today. This is something that the governments of today could and should definitely learn from, especially at a time when a global health crisis of a very different nature is ravaging the world.

Sublime work from every aspect of the production ensures that this gripping and heart-breaking drama, like the disaster it’s depicting, will never be forgotten. An essential, definitive look at the one of the worst man-made disasters in history.