Synopsis: The First Order, under the leadership of Kylo Ren, seeks to consolidate its power following the deaths of Luke Skywalker and Leader Snoke. Meanwhile Rey leads the rest of the Resistance in a bid to restore peace in the Galaxy…

This review will be 100% spoiler free

Review: For over four decades, ever since a little film called Star Wars was unleashed on the world, it became this massive pop culture phenomenon, with an immeasurable, ever-lasting impact on the world of entertainment. Several times over the last few decades, we have seen this franchise take its supposed final bow. First came 1983, then in 2005, closing out the prequel trilogy after two lacklustre preceding films. Following Disney’s overtaking of the franchise, a new trilogy came into being. Four years since this trilogy blasted its way into existence, the time has come for it, and The Skywalker Saga, to take its proper final bow, in rather disappointing fashion.

Having lost instrumental figures following the events of The Last Jedi, both The Resistance and the First Order are seeking to take advantage of the power vacuum in the Galaxy and vanquish the other side once and for all. This galactic power struggle is thrown into further chaos when a mysterious entity, of a terrible foe long since thought to be dead, is threatening to unleash a new terror upon the Galaxy to ensure that the Dark Side will triumph once and for all. 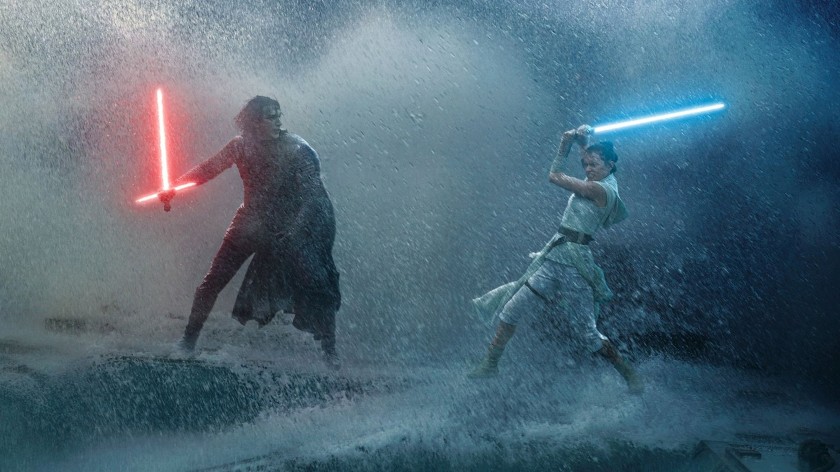 It is not exactly news to anyone who has followed this franchise over the years that after The Force Awkakens chose to play things safe for the reintroduction to this franchise, The Last Jedi made some bold choices in a bid to try and take the franchise forward. In so doing, it caused an enormous divide among fans upon its release. Therefore having retaken the reins from Johnson, the onus was on JJ Abrams to steer this ship home, but it definitely hasn’t come home in one piece. The screenplay from Abrams and Chris Terrio feels very haphazardly put together, giving the impression that a slew of ideas were thrown at the wall and  meshed together, which produced decidedly mixed results. Having managed to craft a pretty airtight script for The Force Awakens, it’s extremely perplexing how the script this time around is full of what feels like unnecessary side quests, consequently feeling rather unfocused.

What’s worse is that some of the dialogue borders on prequel level of how cringe-inducing it is. To add further insult to injury, the directions that some of the characters go in are just completely baffling, and in some cases, are borderline insulting. In the wake of the backlash that was directed at TLJ, all the promising potential that TLJ offered is firmly discarded. All the intriguing plot points put forward are retconned in favour of a script that just for want of a better word, was nothing more than pandering to try and get the fans back onside following The Last Jedi. Favouring appeasement of the fans over bold and creative storytelling feels like an enormous cop-out, and could set a worrying precedent.

This isn’t to say that the whole thing is a complete waste of time, as Abrams brings his usual visual panache to the direction and the lightsabre battles that are present are exhilarating to watch, and for all of the story’s faults, there was potential there. Yet, for all that technical marvel, nothing shown here remotely represents an improvement on what came before it, and everything feels completely inconsequential. Therefore credit where credit’s due as all of the principal cast do excellent jobs reprising their roles, in spite of the less than stellar material they were given to work with, all. The leading lights are once again, Daisy Ridley’s Rey and Adam Driver’s Kylo Ren who by far and away are giving the best performances in the film.

It’s fantastic to see Billy Dee Williams reprise his role as Lando Calrissian but he is frustratingly given sparse to do, and same goes for the rest of the new crop of supporting characters, none of whom are remotely memorable in the slightest, apart from Richard E Grant’s brilliant turn as a First Order officer. Completing the arc of General Leia cannot have been easy considering Carrie Fisher’s tragic passing. However, through the use of archived footage, which surprisingly fits into the story fairly seamlessly, credit can be taken for giving this beloved character a satisfying concluding arc, one that is not a slap in the face to the fans.

No matter what you feel about the preceding two films in in this franchise, they represented the opportunity for the franchise to go in some bold new directions. Thus, to see that all ultimately get thrown away in favour of the direction they did go in is extremely disappointing. For a franchise that has meant so much to so many people throughout the decades, everything was in place for Abrams to wrap up this trilogy in triumphant fashion, but unfortunately, stick the landing, it does not.

While offering some exciting moments, the Skywalker saga ultimately wraps up with what is, comfortably, the weakest film in the trilogy. A disappointment not felt in the galaxy since the days of the Prequel trilogy.