The Harder They Fall  – Film Review

Synopsis: When he learns that his bitter enemy has been sprung out of prison, an outlaw re-forms his gang to take his adversary down once and for all…

Review: What is the first thing that comes to mind when someone says the word “Western”? A shot of a rural town in the USA, showdown duels with guns, cowboy hats/boots, and the familiar sounds of the spurs on the boots, or the doors of a saloon opening and closing. Perhaps there’s also a musical number akin to something that you’d hear from The Good, The Bad and the Ugly, is playing in the background, as a Caucasian hero strolls in on horseback to save the day? The Western is a genre that so often has white people at the forefront of the story. Yet too often, black people find themselves on the sidelines when it comes to these types of films. Hence, to see a Western that places the experiences of black people at this point in history at the forefront, with an all-star cast of some of the finest black actors currently working in Hollywood, is extremely refreshing, and long long overdue.

Nat Love (Majors) is an outlaw who has got a burning desire for revenge against Rufus Buck (Elba) after Buck committed an unforgivable crime when Nat was young. Now as an adult, when Nat learns that Buck has been freed from his incarceration as a prisoner, he’s out for revenge. He reforms The Nat Love gang, which includes real-life historical figure Stagecoach Mary (Beetz) and Cuffee (Deadwyler), to take down Buck once and for all. The only problem for Nat Love and his gang, is that Buck has his own gang surrounding him, including Treacherous Trudy Smith (King) and Cherokee Bill (Stanfield), determined to protect him at all costs. With the conflict between the two rival gangs boiling over into an all-out war, the bullets are gonna fly. 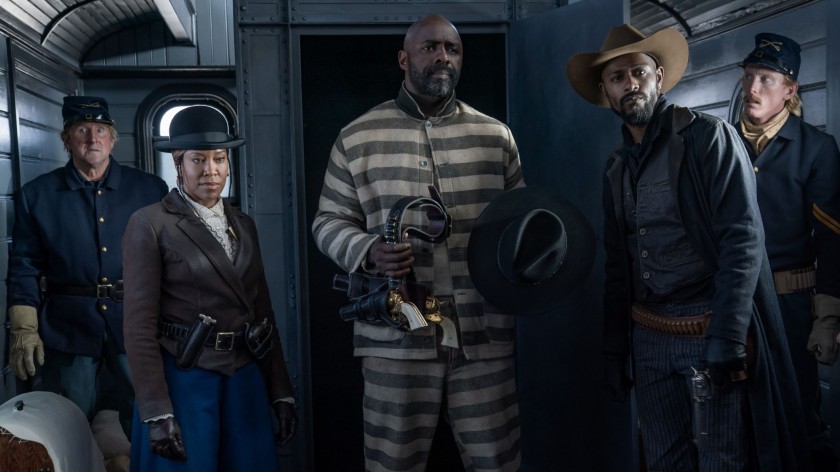 When taking one look at the cast that Samuel has assembled, there’s only one word that best describes it: stacked. No matter where you turn, there are actors with glittering careers everywhere you look. The end result is a brilliant cast, all of whom are in scintillating form. This crop of characters are certainly not ones you would want to cross, but that doesn’t mean that they are not extremely compelling and hilarious to watch. Jonathan Majors is someone who has burst onto the scene relatively late, in comparison to some of his cast members. Yet, in the few short years since he rose to prominence, he’s proven himself to be an extremely compelling on-screen presence. This continues with his performance as Nat. It’s quite the unenviable task to take a character like an outlaw, and add an incredible layer of depth and humanity to that role. Yet, with just about every performance he has given in recent years, Majors pulls it off brilliantly.

As Nat’s love interest, the relationship between Nat and Stagecoach Mary could have been very conventional. While the chemistry between the two is most assuredly there, Beetz plays this character as someone who is not subservient to Nat in any capacity, she’s more than capable of kicking Nat’s arse if she wanted to, and likewise for Cuffee. On the other side of this gang war, the character of Rufus Buck is someone who you dare not cross if you value your life, and Elba’s performance is suitably intimidating. Alongside him, Regina King is clearly relishing the opportunity to play an antagonist, and she’s absolutely terrific to watch. However, there’s far more to both their characters than just robbing banks and shooting down anyone in their way. As with Majors’ Nat Love, and indeed every character that you see on screen, there are subtle nuances to these characters that make them far more than just outlaws who are in this business for the money.

It is incredible to think that this is Samuel’s feature film directorial debut. While he has worked on music videos and short films with Jay-Z (who is one of the film’s producers), it’s quite the leap to go from directing short films and music videos, to directing a thrilling Western with some of Hollywood’s finest. Yet when you watch what Samuel, who also wrote the script, has concocted, it’s an absolutely breathtaking achievement. His direction is so confident and stylish, if you had no idea that this was his first feature film, you would be forgiven for thinking that he’s a seasoned director who has been doing this for years. It all translates into an enthralling and compelling story that grabs you from the word go.

Some may well struggle with the thick Texas accents that some of the characters speak with. However, by telling this story from the perspective of people who were not trapped in the brutal institution of slavery, it lends a much-needed new perspective to the people and the lives they led at this point in history. With such a confident and brilliant feature film debut, an exciting new voice has entered the world of filmmaking. No matter what project he chooses to do next, Jeymes Samuel will surely have captured the curiosity and the attention of audiences all over the world, and deservedly so.

The Western genre has been given a much-needed revitalisation. Impeccable performances from its all-star cast, combined with slick and stylish action, and the end result is a breath-taking feature film debut from Jeymes Samuel.