Synopsis: An actress desperately trying to catch her big break in Hollywood meets a jazz pianist struggling to make ends meet, and the duo begin a blossoming romance.

Review: The art of cinema is one that can have great impact on the human soul whenever we sit down to watch a film for the first time. Cinema has the power to generate so many emotions among its audience, from the most euphoric moments of unrivalled joy to the dark moments of despair. Writer and director Damien Chazelle’s previous directorial outing Whiplash certainly had a mixture of those happy and sad moments, more of the latter than the former mind you. Yet for his new picture, again with a musical theme at its brimming heart, definitely has a lot more of those moments of pure unparalleled joy.

An insane but quite brilliant musical number set on an LA freeway sets you up for the kind of ride Chazelle is about to take you on, as we meet Emma Stone’s Mia, an actress who, despite audition after audition, is just not getting any rewards. By chance she runs into Ryan Gosling’s Seb an aspiring Jazz pianist who also happens to be in something of a rut, this is until he meets Mia, and the two fall head over heels for one another and begin planning a life for themselves together, with both having big aspirations and dreams. It all seems so perfect for them, until their careers threatens to pull them away from one another, and both are presented with a difficult decision. Though this is very much a musical at is heart, its packed with great humour, romance and drama all fused into one glorious picture. right from the aforementioned musical freeway scene, you’ll be hard pressed to not find yourself tapping along with the music. 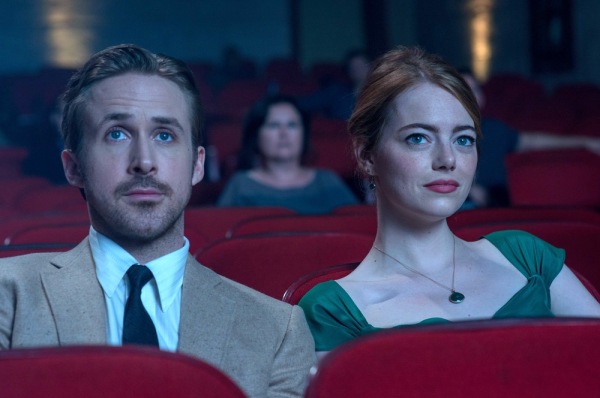 With this marking their third collaboration since Crazy, Stupid Love and Gangster Squad, it’s crystal clear at this point that Emma Stone and Ryan Gosling have brilliant chemistry together, and it is their chemistry along with brilliant performances from them both that help elevate La La Land to a golden standard for musical cinema. As well as the electric performances, the music is also beautiful to listen to. With each note that Stone and Gosling sing, it will find its way to melt your heart and fall in love with these characters, even if a member of the audience is about as emotionless as a Cyberman from Doctor Who, it will lift your spirits and leave you floating on cloud nine. All of us undoubtedly have dreams and aspirations for want we want to do with our lives, and this film has much to say about following your dreams, that will hit home with almost everyone.

Despite those moments of sheer joy, it is not all sunshine and rainbows for our leads, as they encounter some tricky obstacles in both of their lives. Rest assured however, that no one is throwing any chairs at anyone this time, and no psycho music teachers brutally tearing people down. This is nowhere near as intense as Whiplash was, but it’s just as well written and equally tremendously acted, with a glorious cameo appearance from J.K Simmons, this time not in raging jazz teacher mode.

Chazelle, with only his third feature film, seems to have found his spark, when it comes to live action musicals, currently he is the man of the moment, and is certainly proving himself to be a formidable director and one to watch. A recording breaking Golden Globe haul accomplished, with the Oscars in sight, La La Land looks certainly set to sing and dance its way to more awards glory.

With some thumping good tunes, Stone and Gosling on electric form, and a deep, thought provoking story, this is cinema at its heart-warming and magical best.