Synopsis: When alien invaders attack the city of Bricksburg, it leaves the city in ruins an several people are abducted, leaving Emmet Brickowski with no choice but to step up and save his friends…

Review: “Everything is awesome,” three simple words, and ones that whenever you heard them back in 2014 transported you to a world of bricks, and tiny yellow men and women, otherwise known as Lego. For decades, these simple bricks have provided children with endless hours of fun. So when a film about these bricks was announced, many assumed it would be a film marketed as a cash grab just to sell more bricks. However, it turned out to be a really witty and extremely entertaining piece of film-making. This is of course is 2014’s The Lego Movie, and yes everything was awesome with that film.

A couple of spin offs have followed in its wake, but now we have a direct sequel that picks up immediately from the first film. Everything seems to be going well until the city of Bricksburg comes under attack from some outer space visitors. Their attack has wreaked havoc on the city, turning it into a desolate wasteland of a very similar ilk to the Mad Max franchise. Years later, and despite the bleak circumstances, Emmet’s positive outlook on life has not diminished. However, that is put to the test when a subsequent attack results in the abduction of among others, Lucy and Batman by a threat from outer space, leaving Emmet with no choice but to rescue the ones he cares about. 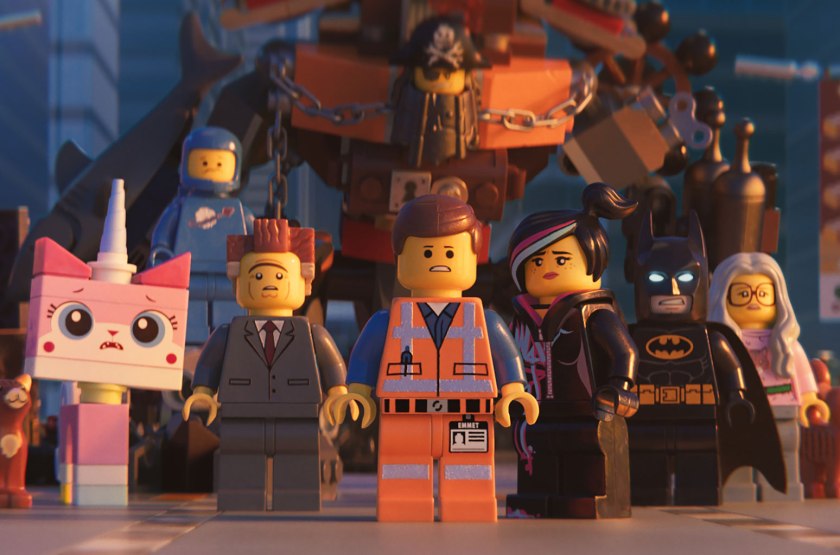 Back when it came out, the first film was such a wonderful, innovative breath of fresh air, and extremely entertaining to boot, helmed magnificently by Phil Lord and Christopher Miller. Though the duo, are now merely on board as writers/producers, t’s clear that their influence comes to the fore and new director Mike Mitchell continues on the trajectory that was set by Miller and Lord. Inevitably, as tends to be the case with sequels, it does mean that it doesn’t feel nearly as fresh or innovative when compared to its predecessor.

The animation and the voice work are once again excellent, with Chris Pratt lending his voice not just to Emmet, but to a fearless warrior named Rex Dangervest, who feels like what would happen if the Lego counterparts of Han Solo and Star Lord had a child. There is an aspect to this story, concerning Tiffany Haddish’s character that could leave some viewers a bit frustrated as it’s a bit superficial, and not very well executed. This isn’t to say that there is nothing substantial as there are some elements, particularly towards the end that are much stronger in terms of the messages they deliver.

However, with plenty of extremely amusing references to some other pop culture properties, it keeps the plot moving along. These will keep the adults entertained, as unfortunately the film unlike its predecessor does feel more aimed at the younger demographics. Furthermore, while “Everything is Awesome” was this insanely infectious piece of delightful pop music that was impossible not to love, this movie’s version of that song is not quite as catchy, or indeed memorable, despite its best effort to be exactly that.

Not as innovative or as witty as its predecessor(s), and the story is hit or miss with its messages. Yet some extremely entertaining pop culture references ensure that this is a mixed, but entertaining, bag of bricks.

Synopsis: When a portal opens at the bottom of the Pacific Ocean and huge alien monsters called Kaiju begin to attack human cities and wipe out thousands of lives. The leaders of the human race pit their resources together and construct huge robotic machines known as Jaegers in order to prevent the oncoming apocalypse

Review:  When the notion of a film’s plot line consists of big robots taking on huge alien monsters , it is a plot line that sounds strangely familiar and one that has been done to death. The likes of Godzilla and Transformers come to mind. However, under the guidance of the visually brilliant Guillermo del Toro, Pacific Rim is a fantastic blend of the two and is a terrific and thrilling ride.

The film sets the scene with a prologue in which these frightening Kaiju creatures have destroyed plenty of cities and slaughtered lives across the world. Humanity’s last line of defence against these creatures is the Jaeger program, headed by Marshal Stacker Pentecost (Idris Elba) who seeks the help of Raleigh Becket (Charlie Hunnam) to come out of retirement and pilot one of these machines.

The acting on show here is of a decent order with Charlie Hunnam proving to be a strong willed and determined protagonist. Alongside him we have Mako Mori (Rinko Kikuchi), a young and untested Jaeger pilot who is keen to prove herself to Marshal Penetecost. The two form a solid relationship as the film progresses and their relationship is a crucial element to the story as they must work together to build a solid neural link together to ensure humanity does not reach its doom at the hands of the Kaiju. Idris Elba is as awesome as he always is in everything he’s in and you can see the fuel in him that drives him to lead the ship through the difficult storm of mayhem and destruction that the Kaiju are bringing to the people of Earth. This desire is apparent within all of the leading characters and through it it drives the story forward.

On the other hand, the apocalyptic mood of the film is counteracted by the humour of the two scientists in the film with Dr Hermann Gottlieb (Burn Gorman) and Dr Newton Geiszler (Charlie Day) who whenever they are on screen always seem to be bickering and squabbling with one another as to how to best defeat the monstrous invaders. Their rivalry and differences of opinion is fun to watch but deep down their desire to ensure humanity’s survival is apparent within both of them.

While the relationship between the three leading characters is central to the story, the fight scenes on show are of monstrous proportions. The size of both the Kaiju and the Jaeger takes your breath away and you watch with glee and suspense as these two titanic monsters go head to head in jaw dropping and exhilarating fight scenes that are among the best that we have seen in this year’s selection of films. Cars get crushed and buildings are reduced to rubble as these great beasts do battle against these great machines of war.  An Oscar nomination for Best Special effects could definitely come Pacific Rim’s way next year.

Thus with interesting characters and some thrilling action sequences, Pacific Rim is certainly a fantastic adventure that gets the adrenaline pumping and leaves the viewer excited and wanting more. Combined with great action sequences and some interesting characters Pacific Rim is certainly one of the finest films that emerged from the Summer Movie season of 2013.

You come for Transformers VS Godzilla essentially and that is precisely what del Toro gives you, and it is nothing but damn good fun.